Face to face with the King of the Himalayas 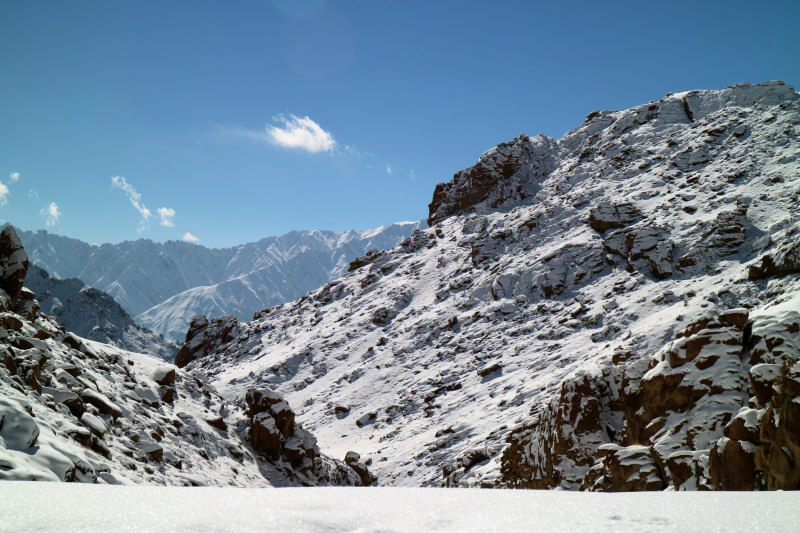 It was a great experience. After many years and countless attempts, I succeeded for the first time in finding a wild snow leopard to photograph up close. It was the longest and most exhausting trip I have taken so far to photograph the rare and shy cat.

When the tour started in December 2016, the conditions on site were anything but favorable, as there was only sporadic snow. So I did the one week acclimatization in Leh spend without snow in the provincial capital of the Indian state of Jammu & Kashmir at an altitude of around 3500 meters. Shortly after my arrival at the "Kushok Bakula Rinpoche" airport, my body showed the normal "alarm signals" caused by the sudden difference in altitude, such as headache. From the previous trips to the region, I still have good memories of this reaction of my body and how to deal with it. So I “shifted down a gear” and took it very slowly. In the first few days I drank a good three liters of water and tea a day and only made small trips around the city. So my body quickly adapted to the already enormous height. Of course I couldn't wait to get out into the wild and to meet the cat, but good acclimatization was the first priority, because there were almost four months ahead of me at even higher altitudes. 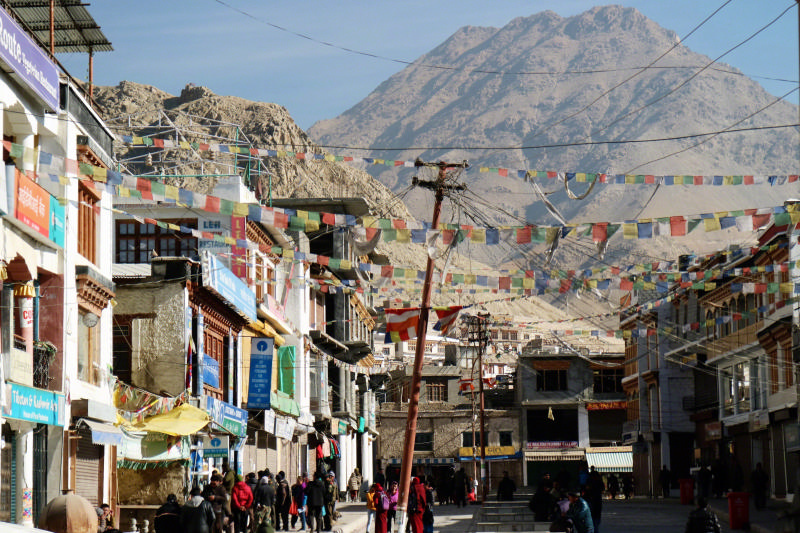 Dec'16 - A view of the market square in Leh, the provincial capital at an altitude of about 3500m im indischen Bundesstaat Jammu & Kaschmir

On Christmas Eve 2016 a driver took me to the first area almost one hundred kilometers from the provincial capital. With forty kilograms of equipment, spread over two backpacks, I faced the first big challenge. All the equipment had to be carried up to the mountains at an altitude of over 4,000 meters, and I had to do it on my own, without any helpers. It was an almost indescribable first day with unbelievable efforts. Each way had to be covered twice, because I couldn't carry the enormous weight of the two bags up into the valley at once. So I worked my way up piece by piece and carried one backpack up as far as I could and then walked back to catch up on the second one. After more than five hours, I did find a suitable location for the tent at first glance and set up the first camp. There are seldom locations for the tent that are level and so I had to struggle with slopes and stones. Due to the frozen ground, it was not possible to compensate. So many sleepless nights followed, because the ISO mat and sleeping bag just didn't want to stay in their place. 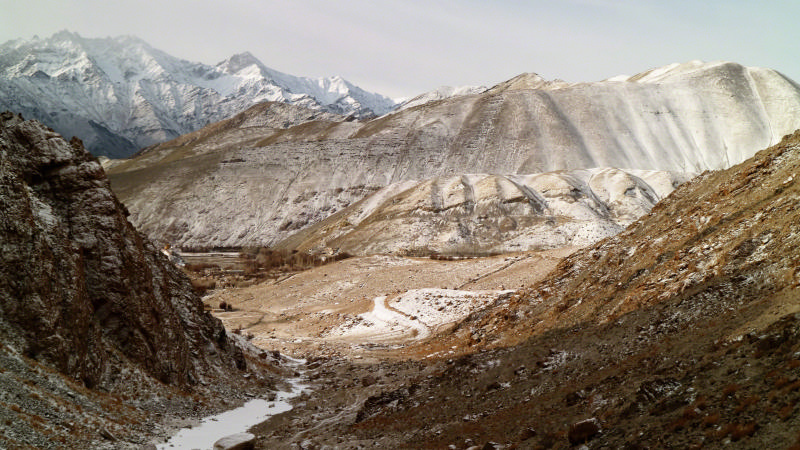 The routine that had been gained on many previous trips returned very quickly. Around five o'clock in the morning watch the surroundings with the camera and then, when the sun warms up the tent around ten o'clock with a little luck, leave the tent briefly to dry the sleeping bag and fill about two liters of water from the small trickle. I deliberately kept the times outside of the tent very short, the valley should look like it always did for the wild animals and so I barely spent more than thirty minutes outside the tent every day.
The field of vision from the tent was very small due to the large focal length of 500mm used and the small opening in the tent. So I was always afraid that the cat would move around the tent, but that I would not be able to see it. It was a very exhausting and painful undertaking, because I had to sit in the tent with my torso twisted all the time to be able to look through the viewfinder of the camera. 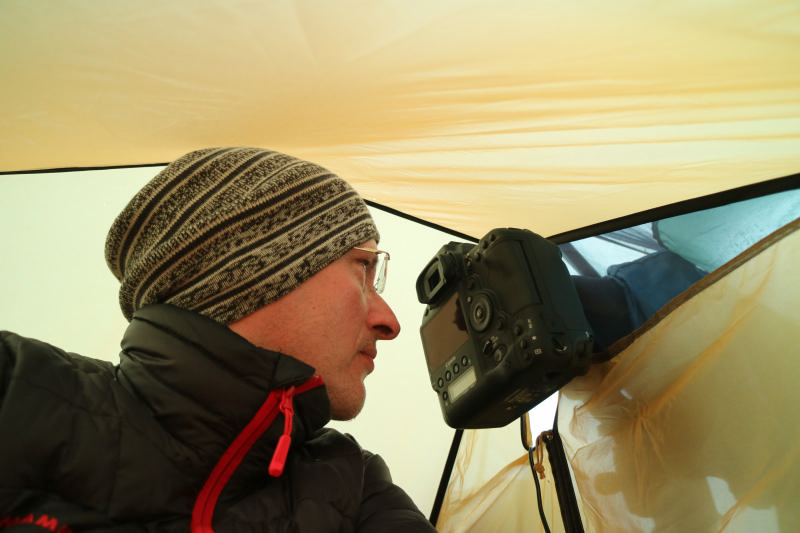 I was able to experience a first little highlight at the end of December 2016. In the late afternoon, when it was almost too dark to be able to take photos without significant image noise, I heard a noise that I knew well. Stones rolled down the rock face and it was not a single animal but many that were on the move. They came down from the rock face to the small level on which I had set up my tent to take the individual grasses and bushes that were still there. I couldn't see them at first, but it could only be Ibexe , a preferred prey for snow leopards. After a few minutes I had the first visual contact, several of the ungulates stood right in front of my tent and looked suspiciously in my direction. Of course, they had immediately recognized that something was wrong here and after a brief consideration they then uttered the typical warning sounds and shortly afterwards ran down the valley in a hurry - a terrific spectacle ... 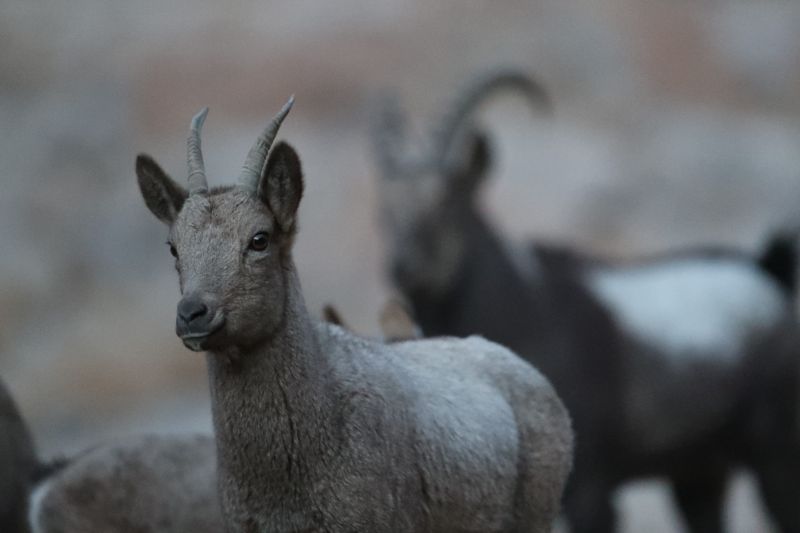 A good week later arrived in the new year, I was able to record another and very important success. During a short stay outside the tent, I could see the first traces of the snow leopard below my tent. It was an exciting moment, so I did choose the right valley, the cat did walk here through the night. The next task was to find out if and when the cat would use this path again and to be ready at the crucial moment. In order to be able to see the area around the tracks better, I decided to change the position of my tent. A sometimes complex undertaking, because the entire tent has to be cleared out for this. Fortunately for me, snow fell for a longer period of time for the first time, a big advantage because it made it easier to recognize and follow the animals' tracks. 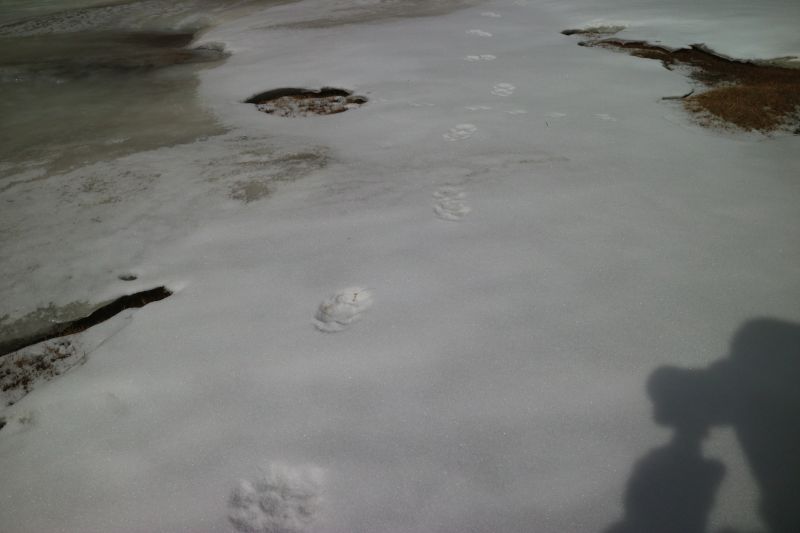 The temperatures at night were down to -15 ° and thus significantly higher than those I had experienced years before in this time of the year. This is presumably a consequence of the advancing climate change everywhere. Camping in solitude for weeks without contact to people and getting along with less than 1000KCal of food a day is not easy, you lose body weight very quickly and your strength also decreases very quickly. Your own body is almost always in emergency mode and is limited to only keeping the important parts of the body warm. 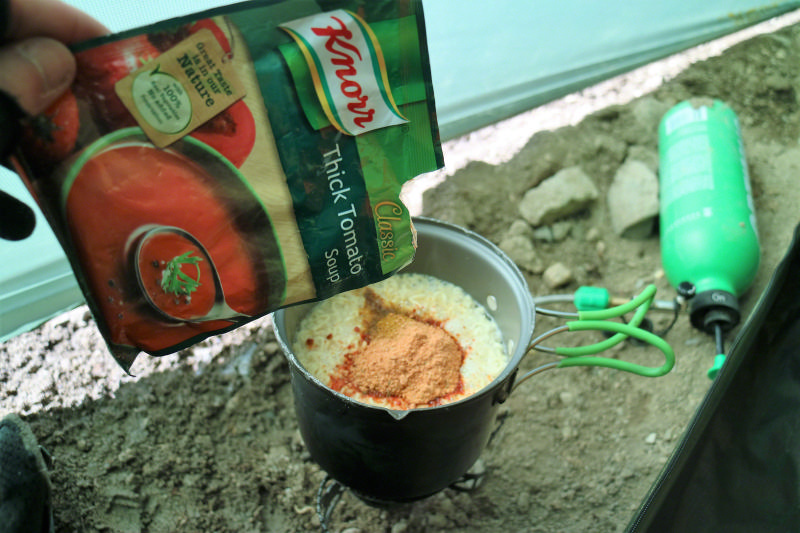 A daily ration, you can provide variety by mixing different soups, for example

A daily ritual, filtering and disinfecting the mountain water 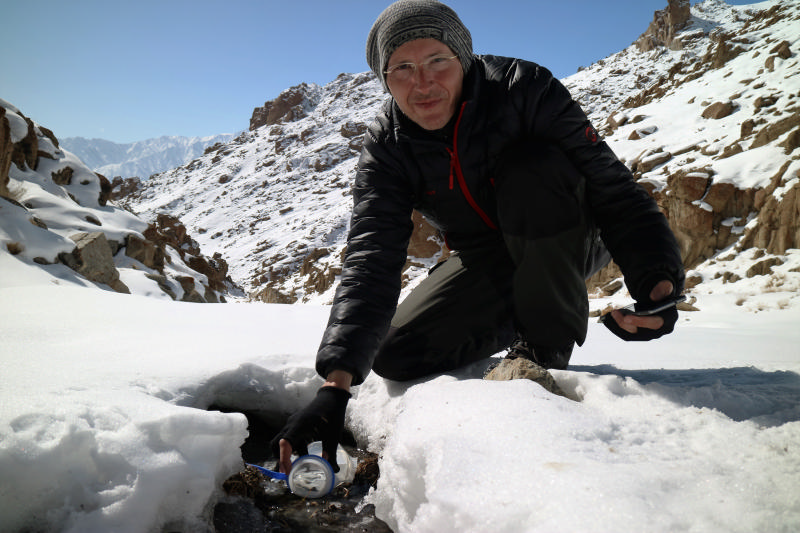 A small trickle was used for water suppl

Now it was time to wait, it was an incredibly grueling wait for the “King of the Himalayas”. Would the cat show up again? Or was it just a one-time short tryst in the valley? The planned time in this valley was coming to an end, soon I would return to the provincial capital for a short stay and after two to three days I would set off for another valley. The cat was nowhere around, no traces or indications that it was still here. But then, when I was already mentally standing under a warm shower in the accommodation in Leh, it happened, the king appeared in front of my tent. In the late afternoon and a good twenty meters from my tent, he stopped and looked into my camera lens suspiciously and warily. I caught my breath - I stared motionless through the viewfinder and in my excitement I almost forgot to press the shutter button. The cat stood in front of my tent for what felt like several minutes and tried to find out what it was about by moving its head and whether there was danger, and then walked leisurely to the small trickle from which I also got water and quenched its thirst breastfeed. 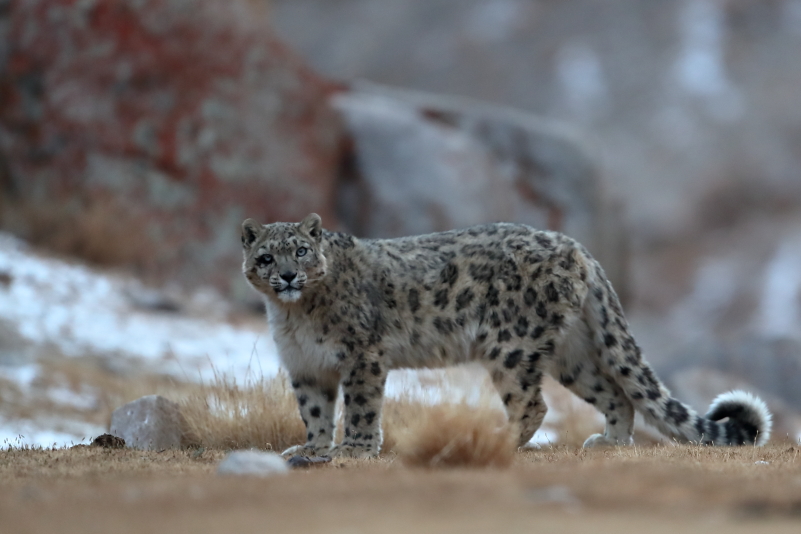 The king of the Himalayas looks me in the eye. 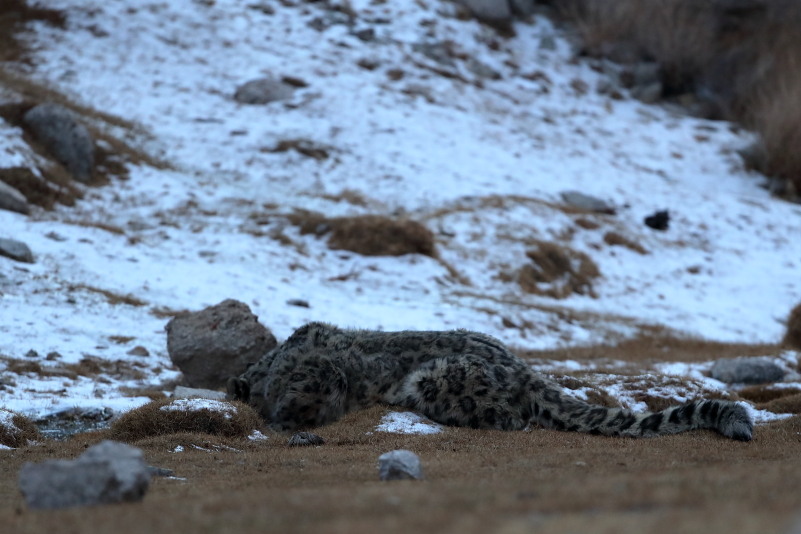 Only one more time I would see a wild snow leopards after more than 30 days of grueling waiting on this trip, and then after almost four months fly back to Germany with ten kilos less weight.